El Salvador held its legislative election on 1 March, using a modified electoral system. The country had already left behind the closed list in 2012, replacing it with an open list. This year the country moved to panachage, the variant of open list in which voters may vote for candidates on different lists (sometimes called “free list”).

El Salvador is one of the few pure presidential systems still using an electoral cycle (a long-term interest of mine) consisting of all non-concurrent elections, with presidential terms of five years and legislative terms of three years. This election is in the first year of the incumbent president’s term, and offered neither “surge” nor decline in his party’s legislative support.

I was first tipped off to the change to panachage by a remark in a Tico Times article just before the election that said:

For the first time, voters will be able to select individual candidates from any party rather than being forced to vote for a single party with an established list of candidates. Voters can still opt to simply choose a party.

This is definitely far more detailed than your average journalistic note about an electoral system. But to be sure, I checked with the Tribunal Supremo Electoral, which has a very useful gallery of ballot images and instruction cards. Below I post an image of the instructions for the district (department) of Cabañas. 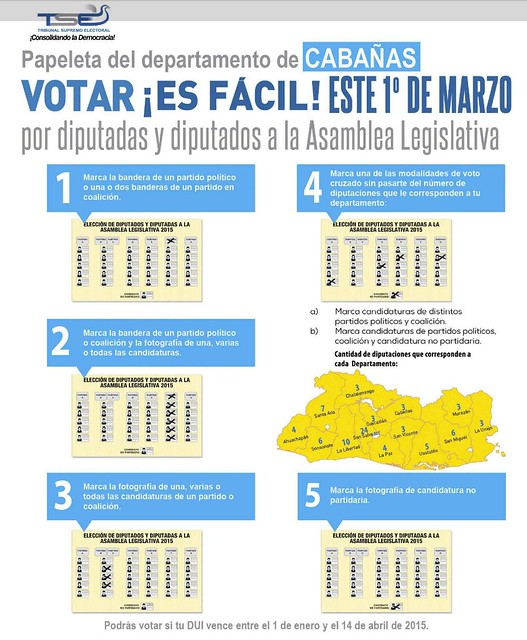 It offers the voter five options:

1. Vote solely for the list of a party or coalition;

2. Vote for a list and mark the photo of “one, various, or all the candidates” on that list;

3. Mark the photo of “one, various, or all the candidates” in one list (without also indicating a list vote);

5. Mark the photo of a non-party candidate.**

It is option 4 that clearly establishes panachage.

By contrast, in 2012, the options excluded any mention of marking candidates across different lists. 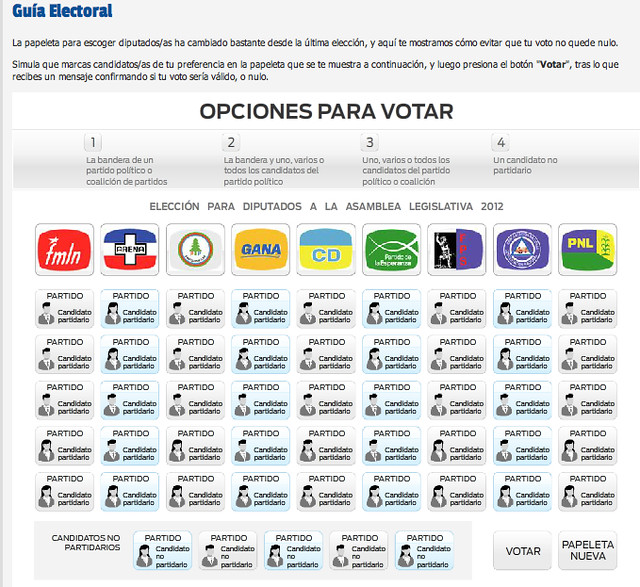 For a long time the only panachage systems in use at the national level (to my knowledge) were in Luxembourg and Switzerland. In 2005, Honduras adopted such a system, and now one of its immediate neighbors has followed suit. (I believe Ecuador still uses a panchage system adopted several years ago; Venezuela used one at least once, but only at the municipal level.)

As for the election itself, there was a considerable delay in reporting the results. It does not seem that the panachage system had anything to do with the delay.

Preliminary results suggest that the opposition ARENA will have a plurality of seats, with 35 (of 84). That would represent a gain of two seats from the 2012 legislative election. The governing FMLN is likely to have 31 (no change) and its ally GANA 10 (-1). The PCN (the pre-1979 ruling party, still just hanging on) is expected to have 6 (-1) and the PDC would have 2 (a doubling of seats for this party that was the main alternative to the right before the civil war ended).

El Salvador hence essentially maintains its long-term relative stasis and close left-right division. The incumbent president, Salvador Sánchez Cerén of the FMLN, was elected by a very narrow margin a year ago. This election barely changes the balance of power, even though it occurs within the first year of a president’s five-year term and hence could qualify as a “honeymoon election”. In Salvadoran politics, there really isn’t much of a honeymoon, or any near-term prospect for the much-anticipated realignment. The big swing to the FMLN in the 2009 legislative election looks, in retrospect, like a blip within what is otherwise ongoing stasis.

It will be interesting to see if the move to an electoral system allowing cross-party voting for the first time begins to break down El Salvador’s remarkably rigid partisan lines.***

____________
* Elections could be concurrent every 15 years, as they were in 1994. However, in 2009, the legislative election was shifted to the “counter-honeymoon” and held in January, with the presidential election, as usual, in March.

** In both options 4 and 5, the reference to independents is singular; logically if voting for an independent is an alternative to voting for a party, one could vote for only one independent just as one can vote for only one party. On the other hand, in a panachage world, one actually can vote for more than  one party (assuming a vote for any candidate also counts for the party on whose list the candidate was nominated), so why would there need to be a restriction on the number of votes that a voter may give for independents? (Note that it is probably quite difficult for an independent candidate to be elected in any case.) [I edited this footnote shortly after posting.]

*** Whether the partisan lines over El Salvador can ever be broken down in the United States is another matter.