Voting technology is one obstacle to wider use of ranked-choice voting. Although groups like OpaVote have had open-source fixes for years, US jurisdictions tend to rely on commercial vendors. A decade ago, many of them resisited developing the technology. Now, of course, voters can “complete the arrow,” as is done in San Francisco, or bubble in a candidate-by-ranking matrix, as was done in Maine last week.

The challenges get thornier with STV elections. Due to the “multi-winner” nature of a race, there sometimes are very many candidates. That can result in confused voters and burdensome vote counts. Only in 1991 did Cambridge (MA) solve these problems by computerizing its electoral system. That could have happened as early as 1936, when many cities still were holding STV elections.

As it turns out, IBM had found a way to mechanize the voting process. George Hallett of the erstwhile Proportional Representation League writes:

Among the most persuasive arguments against P. R., in spite of their essential triviality, have been the objections that it required several days to get the result in a large election and that it required paper ballots and hand counting, both of which in plurality elections without the safeguards of a central count have acquired an evil reputation. In connection with the possible early use of P. R. in New York City, where these objectives would be stronger than ever psychologically, an effective answer to them has now been devised.

IBM’s system used standard, punch-card readers to count STV ballots at a rate of 400 per minute. According to Hallett, “the final result of a P. R. election in New York City can easily be determined by some time in the morning of the day after election.”

Voters would use a series of dials to rank candidates, one through 20. Then, as some will recall, the machine would record a voter’s votes when they pulled the lever to open the curtain. Opening the curtain punched the holes into the punch-card ballot.

Here is the quotation in its context (albeit a bit blurry): 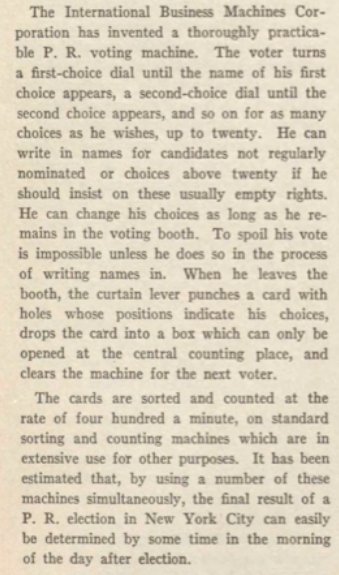 Other features of the system were:

Why the machine did not catch on remains a mystery. IBM appears to have been pitching it to New York City in advance of the November referendum, which put STV into place from 1937 to 1947. Those passing by 41 Park Row could see a demonstration model at the Citizens Union office.

It is a shame that New York (and other cities) did not go with the system. According to Mott (1926), the average invalid-ballot rate in 19 elections to that point was 9.1 percent. My data reveal invalid rates of up to 18 percent (Manhattan and Brooklyn, 1941). Part of this was abstention altogether. Another part was the lack of interest in discerning voter intent, handling skipped rankings with compassion, and so forth. IBM’s machine, however, would have addressed some of those issues, all while educating voters at the same time that they voted.