I noticed that the always handy Election Indices file maintained by Michael Gallagher on his Electoral Systems page did not include Taiwan’s SNTV era of competitive elections (1992-2004). I needed the indicators for something I am working on. It just so happened that I had the candidate-level data for those years (thanks to Nathan Batto sharing them some years ago for another project). So I set out to calculate some key indices. In the off chance anyone needs them, here they are.

I calculated these by considering every independent candidate–and there are many of them, although not many won seats–as a separate “party.” This is the only really proper way to do these indices–especially for a purely nominal system like SNTV–if one has the data at candidate level, and in the absence of any information as to groups of these candidates being de-facto parties.

Values for Ns and Nv for these elections can be found in Bormann and Golder (as “enpp1” and “enep1”, respectively). However, my Nv values are somewhat higher because the index values in Bormann and Golder’s dataset would have been estimated from aggregated votes of “others” (including “independents”). That is, they do not take all others/independents to be one party (as is sometimes erroneously done by others), but without the candidate-level data, any such estimate could fall short of the method I am using, based on complete data on every candidate’s votes and formal party affiliation, if any. My calculations for Ns match theirs for enpp1 almost exactly, as they should, given that relatively few independents won seats (43 over the 5 elections).

Time is running out to get your free download of this just-published article!

The Seat Product Model of the effective number of parties: A case for applied political science

This paper extends Taagepera’s (2007) Seat Product Model and shows that the effective number of seat-wining parties and vote winning parties can both be predicted with institutional variables alone, namely district magnitude, assembly size, and upper-tier seat share. The expected coefficients are remarkably stable across different samples. Including the further information of ethnic diversity in the models hardly improves the estimate of the effective number of parties, and thus the institutions-only models are preferable on the grounds of parsimony and the applicability to electoral-system design or “engineering”.

Patrick Dunleavy, writing at the LSE blog, says that the “UK’s current general election looks certain to put another nail in the coffin of the most famous proposition in political science – Duverger’s Law.” This “law” is, of course, that the plurality rule in single-seat constituencies (FPTP) tends to result in a two-party system. With projections generally indicating that the largest UK party will not win much more than 35% of the vote and 45% of the seats, it does indeed look bad for our famous law.

On closer inspection, however, the UK has been drifting away from the law’s expectations for some time now, and yet even this election does not look like it will mean a break with the “law”. Assessing the performance of the law as a set of expectations for election results depends on just how we define what the “Duvergerian” norm should be, so let’s look at a few different standards and how the UK stacks up, both over time and in this current contest.

1. It is not exactly news that the UK voters and party elites have been less than conformist to the law. Consider the following graph. 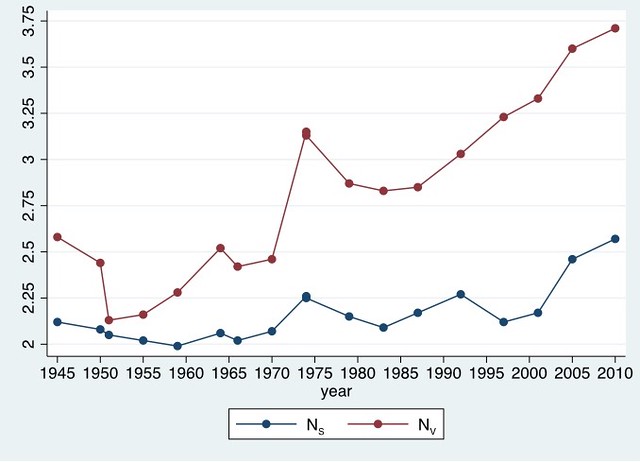 We see that since 1945, and especially since 1974, there has been a mostly steady upward trend in the effective number of vote-winning parties (NV). Only in two elections in the 1950s was NV under 2.25, and in every election since 1992, NV has been greater than three. If Duverger’s Law means that the effective number of vote-winning parties should not be three or higher, then the law was broken in the UK some time ago.

Of course, maybe Duverger’s Law does not require the effective number of vote-winning parties to be less than three. After all, Duverger did say in his original presentation of what he said was closest to a true sociological law of all the propositions in his book Political Parties, that the national effect meant a two-party system in the legislature. He also said that the impact on the voter (which he called the “psychological effect”) was most felt at the district level.

The graph above shows that the effective number of parties in the legislature (NS) has indeed lagged well behind Nv. In fact, it had never been much above 2.25 until 2005 or above 2.5 until 2010. So we could say Duverger’s “mechanical effect”–the electoral system punishing parties other than the major ones–has continued to work even in the face of fragmentation of the vote. I would point out, however, in response to Dunleavy’s piece, that if NS creeping up above 2.5 signals an end to Duverger’s Law, that is nothing new in 2015. 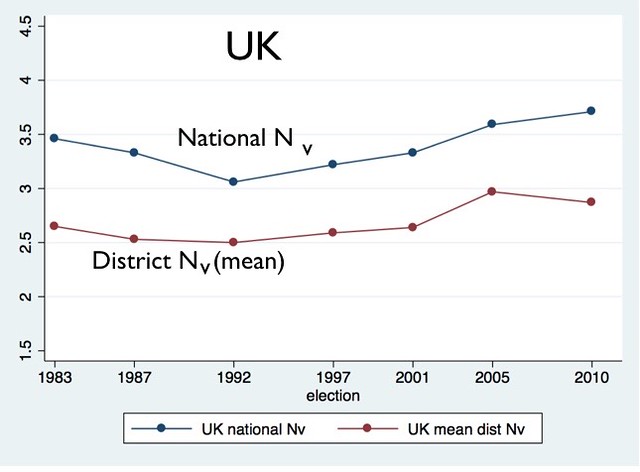 It is not surprising that NV is higher nationality than in an average constituency. After all, some parties are more present in some parts of the country than others, and some seats are safe for one or the other (which results in a sharply lower Nv for such districts than for the nation as a whole). Still, district-level mean Nv has been above 2.5 in every election since 1983, and reached almost 3.0 in 2005, before actually tapering back just a bit in 2010 (despite that being an election with no majority party in seats at the national level). So, either Duverger’s Law has been on something like life support for decades, even at the district level, or at any rate, 2015 is not newly non-conformist to the law.

2. This election will actually be somewhat more “Duvergerian” than 2010 was. I mean in a more qualitative sense, as in “how top-two is the election?”, as opposed to the perhaps overly blunt instrument of a single indicator like the effective number of parties.

The big threat to Duverger’s Law is not the presence of regional parties like the Scottish Nationalists (SNP), who will do smashingly well in this election. Duverger explicitly recognized that regional parties were favored by the FPTP system. What is a threat to the claims of the law being in effect for a given FPTP country is a persistent third national party. In 2010, as in 2005 (and some earlier elections), there was such a party in the form of the Liberal Democrats (and their predecessors). However, with the LibDems’ impending collapse in this election, the top two parties–Labour and Conservative–are going to be much more dominant over the rest than they were in 2010. We should see each of these parties on 40-45% of the seats, and no UK-wide party with even 5% of seats. (Two non-regional parties could have 8-15% each of the votes, but the mechanical effect will squash them down in seats, as expected.)

What about the district level? I will venture that here, too, the mean district effective number of vote-earning parties (NV) will drop, compared to 2010. This is mostly due to the collapse of the LibDems, but also due to strategic/tactical voting in English constituencies where voters concerned about the close national contest between Labour and Conservatives lend their vote to whichever party is best placed in their constituency to defeat their least-liked national party. (Such trends are evident in some of Lord Ashcroft’s polls of marginal seats.) As for Scotland, most districts should be much more two-way fights between SNP and Labour, and a few LibDem-SNP, than was the case in 2010.

The 2015 election thus will have more of a top-two flavor than 2010 in both the UK as a whole and in Scotland.

3. The UK is actually under-fragmented, according to the most fully developed quantitative model of the “Duvergerian Agenda”, by which I mean Taagepera’s (2007) Seat Product Model (SPM). This says that the effective number of seat-winnng parties (NS) at the national level tends to be about the sixth root of the Seat Product, defined as mean district magnitude (M) times assembly size (S):

In both Taagepera’s own work and follow-up work I am doing, we find that the SPM is an excellent predictor of seat fragmentation in countries with various “simple” electoral systems (a category that includes variable-magnitude districted PR, single-district PR–and FPTP). For the UK, with M=1 and S=650, the models says that we should expect NS=2.9 in the UK. Note: 2.9, as in almost THREE, not TWO.

The graph below shows how well the SPM works on just those countries that use FPTP. Each country’s long-term average is shown with its abbreviation at the plotted position. The red line is the expectation of the Seat Product Model. 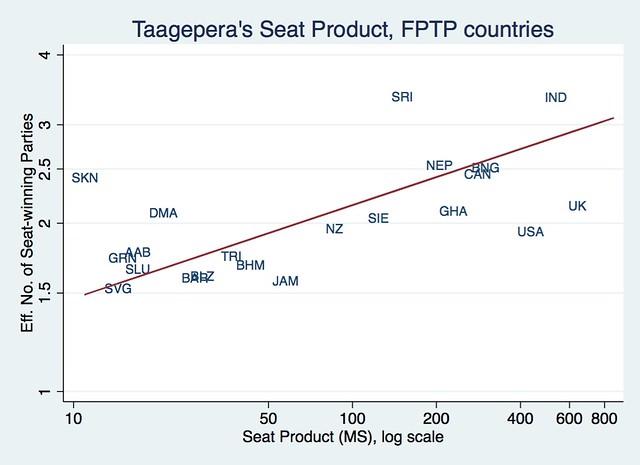 Apparently it works pretty well, overall.** However, the UK really stands out as one of the big outliers! Its average NS is much too low for its very large assembly, despite the single-member district system. In fact, it is more of an outlier than India, on the high side! (It is not, however, as egregious a low-outlier as the US.)

What about 2015’s likely result? Using the Election Forecast projections, the effective number of seat-winning parties would be around 2.6 in this election. So it is creeping upwards towards its expected 2.9, but it still won’t be there. In other words, the UK’s likely 2015 result still remains substantially more top-two dominated than we should expect, given its electoral system–when we include the size of parliament in our definition of “electoral system”, as we should.

In summary, it is hard to sustain the claim that the 2015 election is some sort of final nail in the coffin for Duverger’s Law. We looked here at several ways of defining what a “conforming” election result might look like. In some ways, the UK has been deviating for some time: the effective number of vote-earning parties has long been too high to really be a “two-party system”. While the effective number of seat-winning parties has been lower (as expected, due to the “mechanical effect”), it has crept up in recent elections, meaning 2015 is not really new. Even at the district level, it is not as if we have had consistent two-party dominance in recent times. Moreover, this election result will be more focused around the top two nationally than were the last two elections, and this pattern should be true of the district level as well as nationally. Finally, the UK’s electoral system actually should be able to accommodate an effective number of parties a good deal higher than it will in 2015 (or has in preceding elections), according to the most detailed quantitative model yet of the Duvergerian effect of electoral systems.

Duverger’s Law may be on life support, but it actually has been for some time, and it is not dead yet.

_________
* For those unfamiliar with the index, a quick summary of what it does: It offers a summary of how many hypothetical equal-sized parties would be just as fragmented as the actual constellation of unequally sized parties. Thus if there are three parties, each with a third of the vote, we get NS=3.00. But if one of them is bigger than the others, the index will trend downwards towards two. If one of them splits in half (so the party shares become 1/3, 1/3, 1/6, 1/6) we now have four parties, but as they are unequal, the effective number will be less than four (but more than three–the actual value being around 3.6). It is computed by squaring each party vote or seat share, summing the squares, and taking the reciprocal of the sum.

** Sri Lanka and New Zealand are shown here only in their FPTP eras.