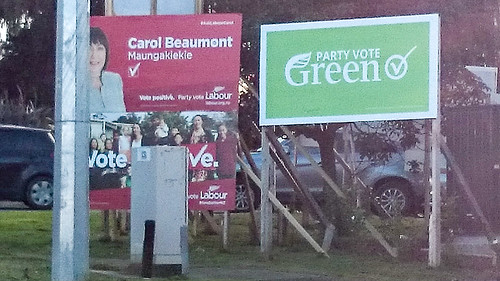 This Saturday is the general election in New Zealand. There seems to be little doubt that National Party Prime Minister John Key will remain in office. However, there is considerable question about what the shape of the post-electoral deals will look like. A New Zealand Herald article goes over the possibilities (some of which may be remote).

The current government was formed from agreements signed by Key following the 2011 election with the Act, United Future, and Maori parties. The latter party is likely to be much diminished, and there has been considerable speculation that Key may need to turn to the New Zealand First Party to make a deal. 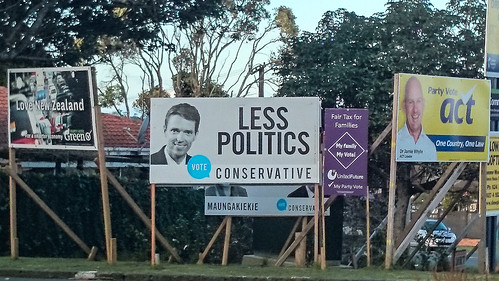 In fact, NZF leader Winston Peters has suggested in recent days that “the media seem to have overlooked one option entirely, a Labour-New Zealand First combination on coalition or confidence and supply.” Anyone who has followed New Zealand politics since about 1996 knows that Peters likes to make himself indispensable, but not pre-committed, to either side. So here he goes again. In the same statement, Peters said voters should be “disabused of the notion” that NZF would allow the Green Party to “promote extremist policies” in a Labour-led government. This statement, too, has echoes of the past. In 2005 his bargaining position was strong enough to prevent Green entry into the cabinet, despite Greens and Labour having campaigned as each other’s preferred partners.*

Among the things to watch in this election (in addition to Internet Mana, discussed here previously) is whether the Conservative Party makes it in. Key had earlier announced that the National Party would not give a free ride to the Conservative leader, Colin Craig, in his electorate as it is doing in Epsom (for Act) and Ohariu (for United Future). Craig will have to make it on his own, by having his party clear 5%.** In late July a New Zealand Herald editorial suggested:

This will be a good election for small parties. Whenever one of the main parties is polling as low as Labour has been this time, some of its supporters give their votes to other parties in the hope of having more influence on the government. Winston Peters will be trying to harvest those dislocated Labour votes and he has complained that the Conservatives are copying his positions on many issues.

It also notes that Key may have calculated, “probably correctly”, that to make a pre-election commitment to help Craig and his (socially) Conservative Party would cost National more votes from the public than his seats would be worth. But if he makes it in anyway, there’s another force on the right to bargain with. This analysis may prove correct, and as the earlier-linked item on government possibilities noted, Craig would not demand a lot for support.

There is much more to be said about the likely performance of various parties in this election, and what the post-election bargaining might look like. So I will step aside for now and let readers say it…

_______
* The linked news item does contain an error in its recounting of the 2005 precedent, however. It says, “In 2005, Helen Clark led a minority government with the support of NZ First, United Future, and the Greens on confidence and supply.” Actually, Greens did not sign a confidence and supply agreement following the 2005 election, settling for a much weaker “cooperation agreement”.

** In New Zealand’s MMP system, a party needs 5% of the party-list vote or one district (electorate) win. If it attains an electorate, it qualifies for more seats from its list if its list vote would be sufficient for 2 or more seats (thereby waiving the 5% threshold).