The following is a guest planting by Dr. Yuhui Li. I suggested Dr. Li draft something for this blog about his recently published book. (Note: I was the Ph.D. committee chair for Huey at UC Davis.)

You can buy the book by clicking here, and taking advantage of a discount! You can get 30% off by entering the code, UMCYCLING (for a limited time). 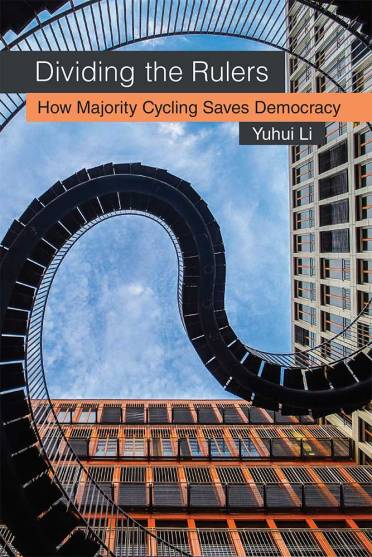 I’m grateful that Matthew offers to post this introduction of my book Dividing the Rulers: How Majority Cycling Saves Democracy. I hope it may interest some fellow political scientists.

The initial thought about the project originated from a debate I had years ago on Chinese social media regarding the choice of political systems. It appeared to me that many people were skeptical about the idea of democracy out of the fear that the majority, at least in theory, could be as tyrannical as individual dictators. But years later, when I learned about the social choice theories as a PhD student, I noticed an almost opposite criticism of democracy from academia, namely the instability of social choice. Both arguments sound convincing, but also at odds with each other: It’s hard to imagine a decision-making body that is both cyclical and tyrannical. In the process of solving the puzzle, I came across Nicholas Miller (1983) and Anthony McGann (2006) and realized that the two arguments can be reconciled. Cycling and the tyranny of the majority can both exist, but they can be negatively correlated with each other. As cycling is clearly the lesser of the two evils, it may be exactly the reason that democracies tend to be less tyrannical than alternative systems.

So building on Miller and McGann, I started to develop a theory and design an experiment to untangle the process of how cycling can actually be a good thing and help the temporary losers of an electoral game. I argue that in a voting body, the key factor that prevents cycling is the cost incurred on those who defect from the winning coalition. If a country’s legislative body has a low “defection cost”, cycling is more likely, and the distributive outcome more equal.

I have to admit, unfortunately, that my modeling skills are not enough to formalize a game with continuous options and highly unstable equilibria, but I did present a rather convincing strategic process showing that in a three-player committee, if the defection cost is higher than 50% of the distributable benefits in a given round, cycling cannot happen. I then conducted an experiment by grouping respondents into three-player committees to verify that process. The experiment results turned out to be more variant than I had expected, but largely confirmed the hypothesis that a high defection cost can deter cycling and result in a more “tyrannical” outcome, with less frequent power alternation. I show that while cycling introduces uncertainty into the policy outcome, it is exactly that short-run uncertainty that creates the long-run equality by reshuffling winners and losers.

In the second half of the book, I connect such a phenomenon to the design of electoral institutions. I argue that low defection costs explain the favorable distributive outcome in countries in which the parliament does not have a majority party and the executive is subordinate to that parliament. This way, not only is the winning coalition more inclusive, but more importantly, it is vulnerable to defection and gives the losing side a better bargaining position.

While it is a common belief in the literature that the outcome of electoral system design cannot be predicted with high accuracy, I construct a comprehensive dataset on countries’ largest party vote shares and show that a no-majority party system can be guaranteed in almost any country as long as the electoral system is sufficiently proportional. I explain such a phenomenon by developing a demand and supply theory of political parties, explaining why, with very few exceptions such as South Africa’s ANC, a majority party’s politicians and voters both have strong incentives to split as long as the electoral system allows small parties to survive. And therefore the aforementioned theory that cycling leads to equality is not merely a thought exercise, but an attainable outcome given appropriate institutional design.

There are two features of this book that I think are worth noting. First, it goes beyond positive empirical study of political institutions and offers a clear normative objective for institutional design, which is to ensure an unstable winning coalition to guard against a tyrannical government, whether it represents a majority or not. And second, the book is accessible for readers with minimal political science training, as I strive to convince as many people as possible by using intuitive methods and providing explanations to advanced concepts.

One thought on “Dividing the Rulers: How Majority Cycling Saves Democracy”