Just a quick add-on to my previous remarks on the UK 2019 election. Via @kiwiting on Twitter comes this example of a Brexit Party local leaflet. 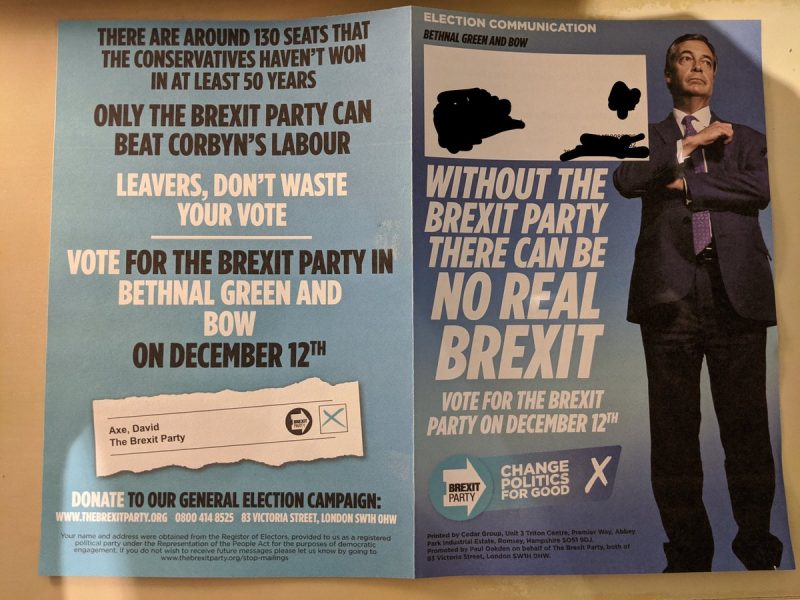 Look closely and you might actually see the local candidate’s name! As I stress in the preceding post, I expect parties under FPTP (at least in parliamentary systems) to require a national presence in the party system in order normally to do well at the constituency level. That is a key insight of the Seat Product Model, and how it stands apart from “bottom-up” approaches that stress local district-level “coordination” as what drives a party system. But this is pretty extreme: the Brexit Party is not only a single-issue party, it is also a one-man band!

Even though this party at one point was polling above 20% (and won a plurality of the UK vote in the European Parliament elections), it was always hard for me to take the Brexit Party seriously. On the one hand, it certainly is a nationally focused party. On the other hand, the leader Nigel Farage made a decision not to contest any constituency, or to target even one seat somewhere that some candidate of the party might win. The process behind the SPM implies that voters respond to the “viability” of a smaller party, and tend to vote for it without too much regard for the viability of its candidate in their own district. But for that to work, it has to be viable–and preferably winning–somewhere. Not only did the Brexit Party not even try this, it pulled its candidates out of seats the Conservatives hold, while retaining candidates only in districts held by other parties. It is a bizarre strategy if the party was serious, and it is no wonder the party is on life support. Of course, they are going to get their one policy issue enacted (even if not as “hard” as they would like), precisely by not posing too big a risk to the incumbent government’s pursuit of a (manufactured) majority.

5 thoughts on “The Brexit Party”