I am going to assume the polls are right and Emmanuel Macron will squeak past Marine Le Pen and be elected president in the runoff in France’s presidential election. (The polls actually suggest he will win at least 60% of the vote.) Let’s think ahead to the assembly elections, which come in June (also in two rounds).

I have seen various references to a likelihood of “cohabitation”. This is nonsense, if we define that term properly to mean cases in which the president and premier are from opposing parties and the president’s party is not in the cabinet. But let’s give people saying this the benefit of the doubt, and assume they mean the presumptive President Macron will have a difficult coalition-building task ahead of him with the assembly he will face. This is not unreasonable to assume, given that Macron has no existing party to start with.

Even this weaker prediction of a challenging assembly environment for the young “outsider” president is probably wrong. Honeymoon elections really matter, and France has had, since 2002, an extreme version of a honeymoon cycle, with the assembly election only about a month after the presidential.

This first graph is from the forthcoming Votes from Seats by Matthew Shugart (yes, me) and Rein Taagepera. Unlike most graphs in this book, this is not a logical model. That is, it is not based on deductive logic for the specific equation plotted. The equation is an empirical regression result. However, the basic idea of a honeymoon surge is itself well documented (as explained in Chapter 12 of the book, citing earlier work by me and others). 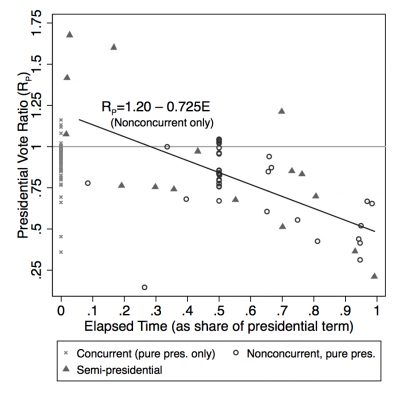 The upcoming French assembly election will be about 1/60=0.0167 on elapsed time, E. Macron has won, according to initial results, about 24% of the first-round vote for president. So, doing the math in the (empirical) equation, we get:

In other words, if the pattern holds for France, 2017, we should expect Macron’s new party, En Marche!, to get around 29% of the vote (24*1.19=28.6). Is that even possible, given En Marche! did not even exist prior to Macron’s campaign? I do not know, and I will not call this a “prediction” given it is just an empirical pattern and not a logical model. But there you have it, for what it is worth–in the absence of any other information, I am going with around 29% of the vote.

Note that there is only one non-concurrent election with E<0.1 for which Rp<1. Even with an untested party, I like Macron’s party’s chances of getting over 25% of the vote.

For comparison purposes, a largest vote-earning party in this range would not be unprecedentedly low for France. In 2012, the Socialist Party of just-elected Francois Hollande won 29.4%, and this was the largest percentage for any party in the election by a margin of 2.3 percentage points. Hollande himself had won 28.6%, so his party had only a small honeymoon boost. In 2007, Nicolas Sarkozy’s UMP did better, at 39.5%. Sarkozy himself had won 31.2%, yielding a boost about in line with that implied by the Rp equation.

Of course, what matters more is seats. Does the French electoral system tend to boost seat shares? Yes, we might say that it does. Despite the low shares for the largest party, the use of two-round majority-plurality in single-seat districts means that the largest party can expect quite a further boost indeed.

The second graph has plots of the seat share of the largest party (s1, left panel) and the effective number of seat-winning parties (NS, right panel) since 1958. The “expected” line is based on the Seat Product Model predictions. As explained in Votes from Seats (and also in Taagepera’s 2007 Predicting Party Sizes), these are based on logical models (deductive quantitative reasoning). They are not merely empirical regressions, but regression confirm them on a large dataset of national elections. They are: 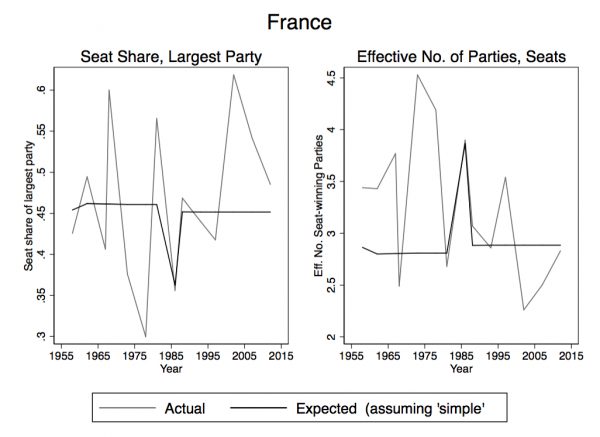 It might be noted that the previous honeymoon elections depicted here are 1981, 1988, 2002, 2007, and 2012. All show s1 above and NS below the expectation. In other words a less fragmented party system due to the honeymoon boost for the just-elected (or, in 1988, reelected) president.

Even in 2012, with his party on only 29.4% of the votes, Hollande almost had a co-partisan majority. His Socialists had 48.5% of the seats, thanks to the electoral system; with allies, he had a large working majority of over 57%.

The models assume a “simple” system–one with a single tier of allocation in one round using a basic PR formula. FPTP counts (any PR formula when M=1 is the same as plurality), but obviously majority-plurality does not, because it is not a one-round system. Even so, the worst we can say is that in some elections we get an actual seat-winning party that is bigger than predicted (for a simple system of the same number of single-seat districts) and an effective number of seat-wing parties that is lower than expected. The major exceptions to this generalization are from the 1970s. (Note the abrupt change in expected value in 1986; this was the one PR election of the Fifth Republic.)

Of course, the reason why we might expect s1 to be higher than predicted and NS to be lower is the the largest party benefits from alliance deals in the districts between rounds. But the expectation on seats–based, again, on the incorrect assumption that this is a plurality system–is not too far off, despite the fact that the votes are so fragmented that a party with just 30% in the first round is sometimes the biggest party.

We can assume that Macron and En Marche! will benefit from alliances against the National Front. It is harder to predict what the patterns will be with respect to the traditional right and left.

The bottom line is that I would expect En Marche! to emerge as the biggest party, based on the honeymoon cycle, with somewhere between 24% and 30% (maybe more!) of the vote, and somewhere between 40% and over 50% of the seats. I would further expect Macron to have no difficulty appointing a premier of his choice, and to have a ruling coalition that will be dependent on him for its very existence. Of course, I can’t say how effective this coalition will be at governing, or whether it will last Macron’s term, or even if my expectations will be proven totally wrong. But at the very least, let’s not wring our hands over prospects of a president hobbled from the start.

The electoral cycle (honeymoon elections) and the electoral system (majority-plurality) work very much in the incoming president’s favor, and these patterns may well hold even for a president from a new and untested party.

___
(I corrected a really bad mistake in the paragraph starting “Note that…”; the point of the post is not being changed, it is just being made more accurately.)

33 thoughts on “France: what to expect for the assembly?”