Temperatures are warming more in winter than other seasons, according to research carried out in the Central Valley, including here in Yolo County, by UC Agricultural and Natural Resources (UCANR). That is bad news for growers of deciduous nut and fruit trees.

Tree crops will move northward (a trend that is already noticeable). Breeders are working on new varieties of pistachios that have lower chilling requirements. In the shorter run, growers are working with “other tactics to improve winter chill, such as using overhead sprinklers to cool the trees and painting them white with liquid clay to reflect sunlight.”

I have used both (in my San Diego County days) sprinkling during warm spells and painting of trunks and major branches to boost chances of production on varieties that are a bit marginal for my area. 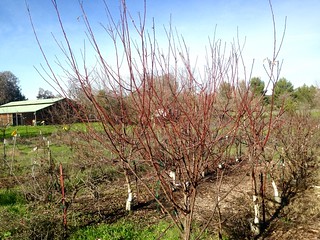 Orchard rows on Dec. 19, 2016. Trees in background just pruned. Those in front not yet, at the time. That’s the ultra-vigorous ‘Shaa Kar Pareh’ apricot in front.

Such tactics won’t be necessary for me this winter, however. We have had an exceptionally–by recent standards–chilly winter. At my location, December’s mean low and high temperatures were 36.8 and 54.9F, which is slightly below long-term averages for nearby stations (Davis and Vacaville). By comparison, our monthly means for December, 2015, were 39.4, 55.1; in December, 2014 they were 47.1, 58.0 (!).

My trees should like this winter a lot! Now, if only we can avoid really heavy rain in the bloom period. Given the trend so far this winter–on track for possibly the wettest ever recorded–that is certainly not something I can count on.