After years of little more than an occasional storm, we had quite a series of storms, and they were big ones. The Sacramento River is mighty once again!

The view is from Old River Road, which is usually high above the water level. So are those houses. Now they are really riverfront properties in a perhaps overly literal way.

The river does not flood its banks, however, due to a remarkable piece of 1916 engineering called the Sacramento Weir and its manually operated gates. Last week was the first time this had been opened in over a decade. 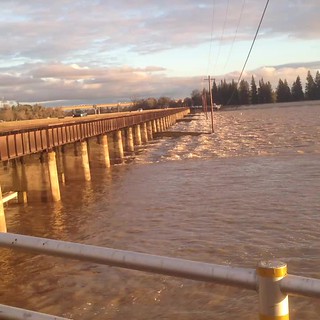 (short video; click to open in a new window and play)

That is Old River Road running over the Weir, and parallel to it, the Sierra Northern Railway.

When the river reaches a certain level, the gates of the Weir are open and the overflow spills into the vast tract of low land known as the Yolo Bypass.

The levees around the river and the bypass protect not only houses, but farmland. For instance, this recently planted nut grove (walnuts, probably) that is directly across Levee Road from the bypass.

Below is a photo of the Sacramento River looking upstream. Those trees are growing on the steep bank of the normally dry levee.

The Sierra Northern crosses another section of the bypass that is fed by a weir farther upstream. Here it is on a trestle that is normally high above the wetlands. A road runs through there, but at ground level, which is, for now, now well below water level. (View from the I-5 causeway.)