While the presidential race has tightened, the possibility of Donald Trump being defeated by a wide margin has some Republicans worried about their odds of retaining control of Congress. However, only a handful of Republican-controlled districts are vulnerable. Speaker Paul Ryan’s job security and continuing GOP control of the House is almost assured, even if Democrats win a majority of the national Congressional vote. How is it that the chamber supposedly responsive to “The People Alone” can be so insulated from popular sentiment? It is well known that the Republican Party has a competitive advantage in the House because they win more seats by narrow margins, and thus have more efficiently distributed voters. What is poorly understood is how the current level of observed bias favoring the GOP was the result of political choices made by those drawing district boundaries.

This is a controversial claim, one that is commonly challenged. However, in Gerrymandering in America: The House of Representatives, the Supreme Court, and the Future of Popular Sovereignty, a new book co-authored by Anthony J. McGann, Charles Anthony Smith, Alex Keena and myself, we test several alternative explanations of partisan bias and show that, contrary to much professional wisdom, the bias that insulates the GOP House Majority is not a “natural” result of demographic sorting or the creation of “majority-minority” districts in compliance with the Voting Rights Act of 1965. It is the result of unrestrained partisan gerrymandering that occurred after the 2010 Census, and in the wake of the Supreme Court’s 2004 decision in Vieth v Jubelirer, which removed legal disincentives for parties to maximize partisan advantage in the redistricting process.

We measure partisan bias using the symmetry standard, which asks: What if the two parties both received the same share of the vote under a given statewide districting plan? Would they get the same share of seats? If not, which party would have an advantage?

We calculate seats/votes functions on the assumption of uniform partisan swing – if a party gains 5% nationally, it gains 5% in every district, give or take an allowance for local factors (simulated through random effects that reduce our estimates of bias). Linear regressions provide an estimate of what level of support the Democrats expect to win in each district if they win 50% of the national vote, given the national level of support for the party in actual elections, and we generate a thousand simulated elections with hypothetical vote swings and different random local effects for each district, to create our seats/votes functions. 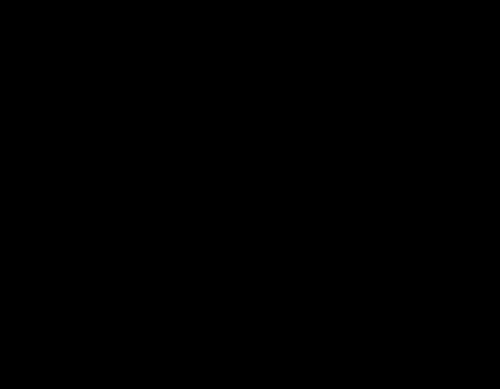 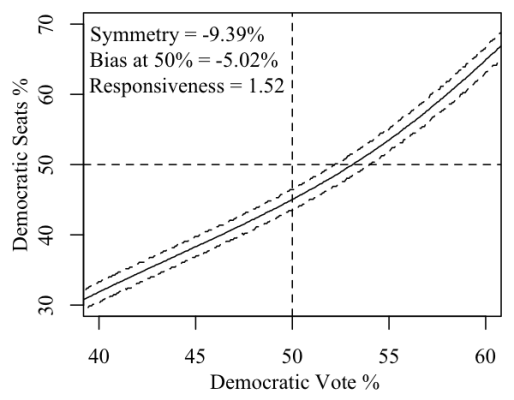 Figures 1 and 2 show the seats/votes functions under the 2002-2010 Congressional districts, and the 2012 post-redistricting districts, respectively. We observe a 3.4% asymmetry in favor of Republicans under the older districts. This is still statistically significant, but it is only about a third of the 9.39% asymmetry we observe in 2012. Graphically, the seats/votes function in Figure 1 comes far closer to the 50%votes/50%seats point. The bias at 50% of the vote is less than 2% under the older state districting plans, compared to 5% in 2012. That is, if the two parties win an equal number of votes, the Republicans will win 55% of House seats. Furthermore, the Democrats would have to win about 55% of the vote to have a 50/50 chance of winning control of the House in 2016. Thus it is not impossible that the Democrats will regain control of the House, but it would take a performance similar to or better than 2008, when multiple factors were favorably aligned for the Democrats.

Increased bias did not result from “The Big Sort”

Perhaps the most popular explanation for increased partisan bias comes from the “Big Sort” hypothesis, which holds that liberals and conservatives have migrated to areas dominated by people with similar views. Specifically, because Democrats tend to be highly concentrated in urban areas, it is argued, Democratic candidates tend to win urban districts by large margins and “waste” their votes, leaving the Republicans to win more districts by lower margins.

The question we need to consider is whether the concentration of Democratic voters has changed relative to that of Republican voters since the previous districts were in place. In particular, if it is the case that urban concentration causes partisan bias, then we would expect to find relative Democratic concentration increasing in those states where partisan bias increases. In order to address this question, we measure the concentration of Democratic voters relative to that of Republicans with the Pearson moment coefficient of skewness, using county-level data from the 2004 and 2012 presidential elections. As shown in Table 1, in most states the level of skewness toward the Democrats actually decreased in 2012.

In twenty-seven out of the thirty-eight states with at least three districts, the relative concentration of Democratic voters compared to Republican voters declines. Moreover, in those states where partisan bias increased between the 2000 and 2010 districting rounds, those with an increase in skewness are outnumbered by those where there was no increase in skewness, by more than two to one. We also find that there was reduced skewness in most of the states where there was statistically significant partisan bias in 2012.

Of course, we should not conclude that geographical concentration does not make it easier to produce partisan bias. North Carolina was able to produce a highly biased plan without the benefit of a skewed distribution of counties, but to achieve this, the state Generally Assembly had to draw some extremely oddly shaped districts. While the urban concentration of Democratic voters makes producing districting plans biased toward the Republicans slightly easier, it makes producing pro-Democratic gerrymanders very hard. In Illinois, the Democratic-controlled state legislature drew some extremely non-compact districts but still only managed to produce a plan that was approximately unbiased between the parties.

Another “natural” explanation for partisan bias, one that is especially popular among Southern GOP legislators, is that that it is impossible to draw districts that are unbiased while at the same time providing minority representation in compliance with the Voting Rights Act of 1965. The need to draw more majority-minority districts, it is argued, disadvantages the Democrats because it forces the inefficient concentration of overwhelmingly Democratic minority voters.

To test this possibility, we subtract the average percentage of African-Americans and Latinos in districts where those races made up a majority of the population in the 110th Congressional districts from the 113th Congress averages. Figures 3 and 4 display the results for these states. For majority-Latino districts, we find no evidence that states with increased Latino density have more biased redistricting plans. 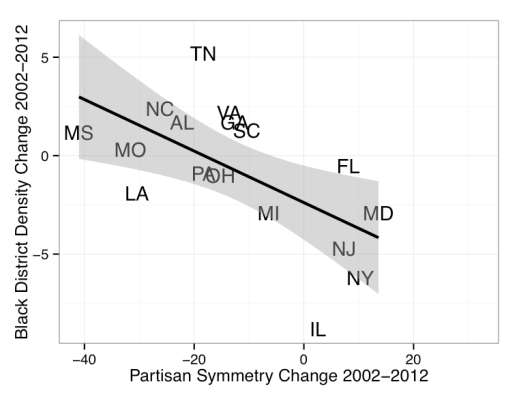 By contrast, states with increased majority-Black densities have clearly adopted more biased districting plans. Among the states with substantial reductions in partisan symmetry, only Louisiana (−1.9 %), Ohio (−1.0 %), and Pennsylvania (−0.9 %) had lower average percentages of African Americans in their majority-minority districts after redistricting. The three states with the largest increases in majority-Black district density, Tennessee (5.2 %), North Carolina (2.4 %), and Virginia (2.2 %), include some of the most biased plans in the country. This is not in any way required by the Voting Rights Act – indeed, it reduces the influence of African-American voters by using their votes inefficiently. However, it is consistent with a policy of state legislatures seeking partisan advantage by packing African-American voters, who overwhelmingly vote for the Democratic Party, into districts where the Democratic margin will be far higher than necessary.

Demography is not destiny

The bias we observe is not the inevitable effect of factors such as the urban concentration of Democratic voters or the need to draw majority-minority districts. It is for the most part possible to draw unbiased districting plans in spite of these constraints. Thus if state districting authorities draw districts that give a strong advantage to one party, this is a choice they have made – it was not forced on them by geography. The high level of partisan bias protecting GOP House control can only be explained in political terms. As we show in our book, Pro-Republican bias increased almost exclusively in states where the GOP controlled the districting process.

One of the immediate consequences of unrestrained partisan gerrymandering is that, short of a landslide Democratic victory resembling 2008, the Republicans are very likely to retain control of the House. But one of the more profound consequences is that redistricting has upended one of the bedrock constitutional principles, popular sovereignty. Without an intervention by the courts, political parties are free to manipulate House elections to their advantage without consequence.

20 thoughts on “Republicans will likely keep their House majority – even if Clinton wins by a landslide – and it’s because of gerrymandering.”