In light of the Austrian presidential runoff election this past Sunday, the question arises: how common is it for the first-round leader to be defeated in the runoff? I can’t claim to have a specific quantitative answer to this question. However, I do have a graph that I prepared some years ago that helps contextualize the Austrian case.

The original graph has only Latin American cases, and ends around 2006. In the version posted here, I add the Austrian election and another prominent example from Europe: Portugal (1986). The x-axis shows the vote percentage of the candidate who came in first in the first round, while the y-axis is the second candidate’s vote percentage. A triangle indicates cases in which the second-place candidate came back to win the runoff. 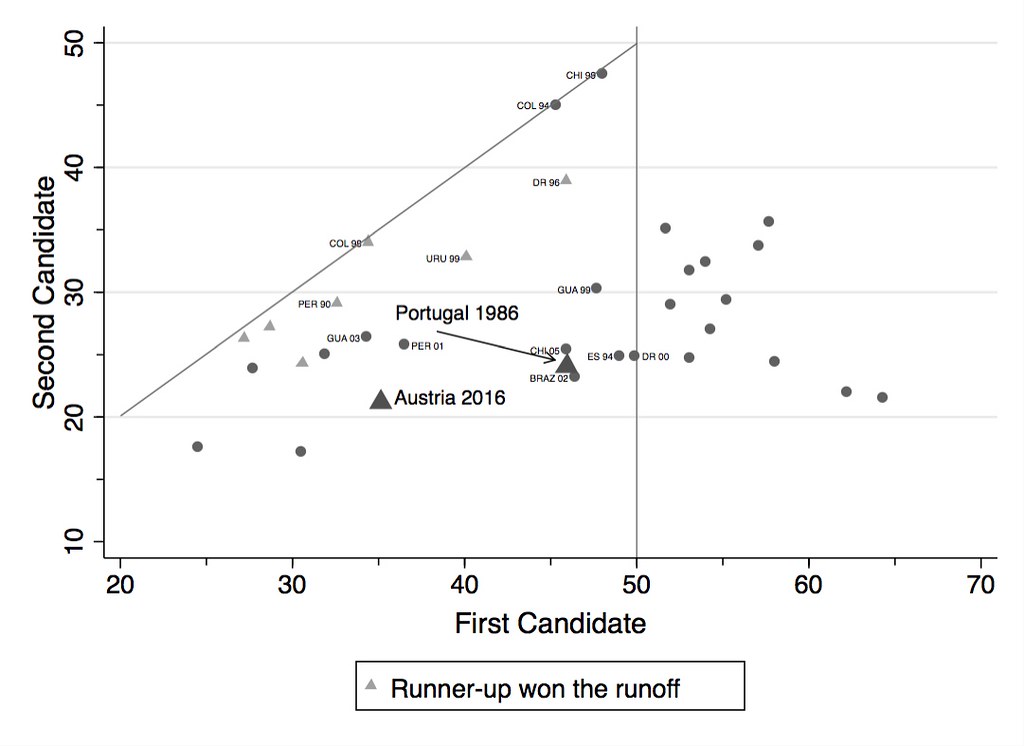 The vertical grey line is at 50%. Obviously, if the first round result is to the right of this line, there is no comeback possible because the threshold for victory was met in the first round. The diagonal grey line marks equality between the top two candidates.

We should expect runoff comebacks (those marked with triangles) to be decreasingly common as we move farther down from the diagonal, and also as we get closer to the 50% line. In this sense, the Portugal 1986 case is truly extraordinary, as the first-round leader was quite close to 50% and faced a runoff challenger who had finished far back. The Austrian case is quite striking, too, with the second candidate having a shortfall to make up that was almost as big as in the Portuguese case. On the other hand, a leading candidate on only 35% is quite vulnerable. Most of the earlier cases depicted in the graph are of front-runners who were under 35%, and there are two others (aside from Portugal 1986) in which the first-round leader was over 40%. But all of these other cases had with a runner-up much closer than was the case in Austria.

Some day I should update the graph with more recent Latin American cases, as well as the full range of cases from other regions. This graph, however, makes clear that a comeback like we just saw in Austria is unusual.
_____________
(The original version of the graph appears in Matthew Søberg Shugart. 2007. “Mayoría relativa vs. segunda vuelta: la elección presidencial mexicana de 2006 en perspectiva comparada,” Política y gobiernoXIV, 1, Primer semestre.)