Normally, the first signs of fruit trees getting ready to bloom would be a time of excitement. But when several trees are showing such signs on the 26th of January, it is more a cause of concern.

It would be one thing if the trees are almonds. We just had Tu Bi-Shvat yesterday, after all, and this Jewish ‘New Year for the Trees’ is suppose to be at roughly the time that the almond trees begin blooming in the Land of Israel. And much of California, including this location, has a ‘mediterranean’ climate type, as has Israel. Yet this year we will have a second month of Adar, inserted because Tu Bi-Shvat has come “too early”; the almond trees are not supposed to be in bloom yet, and we need to adjust the calendar to keep Pesach (Passover) in its proper season–the full flowering of spring. I am told by a contact that almonds already are in bloom in Israel. Mine are merely showing the very early signs of readying to bloom. However, several other trees that should flower after the almonds are gearing up. And that is a worrisome sign of a spring coming too early. We still have winter rains to get through–expected to be heavy later this week, and probably in much of February–and the ever-present danger of wintertime frost and freeze, which can wreak havoc on blooms and young fruitlets.

This is the ‘Flavor Delight‘ aprium. Look at all those red buds. It will be blooming soon. 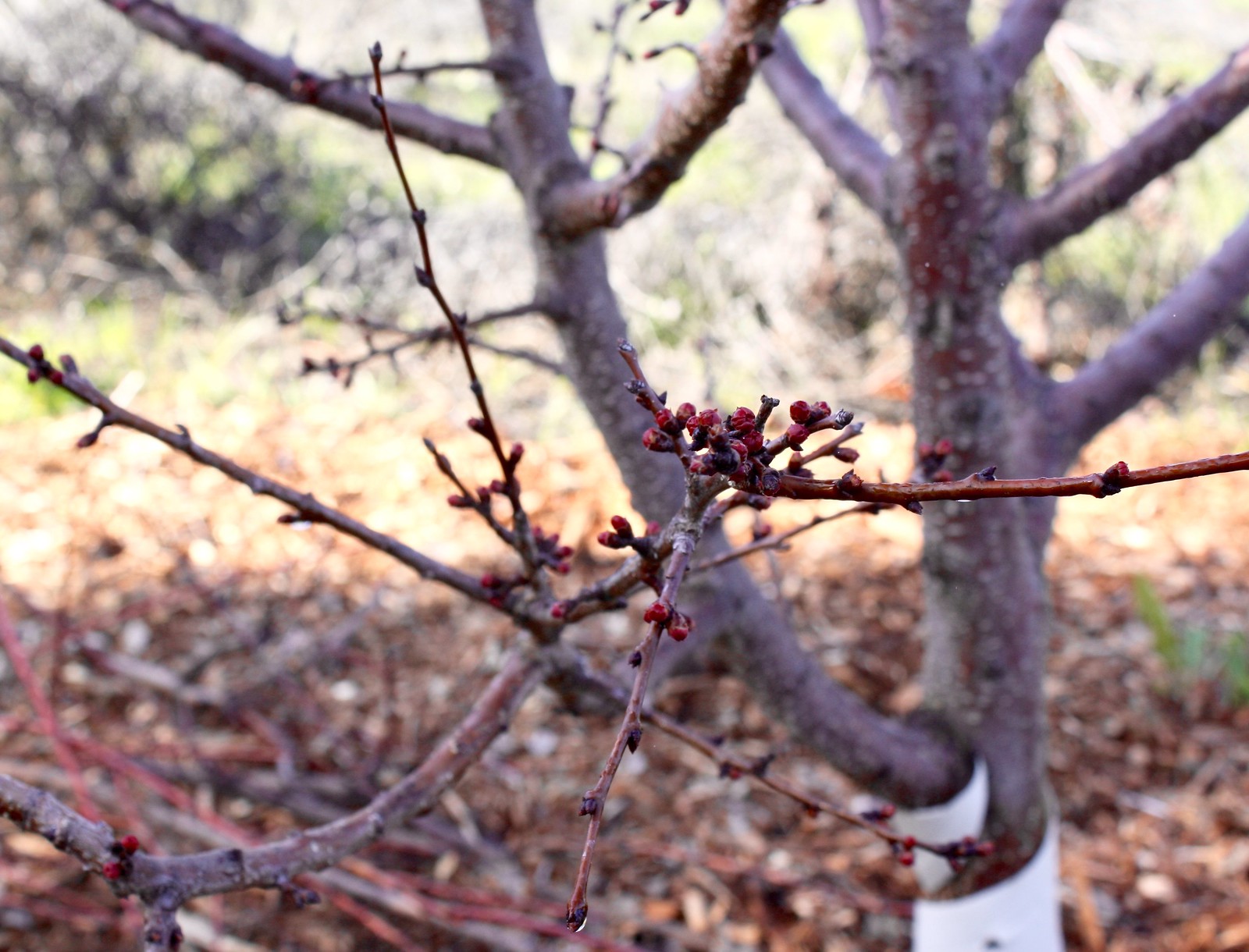 ‘Flavor Delight’ tends to bloom early, but this is more than a week ahead of last year, when it was actually a warmer winter. This is a variety with an evidently low chilling requirement, so once the weather warms enough, it will bloom early. But this early? (I might have expected that in San Diego, but not this far north.) The first bud swell for this tree in 2015 was 3 February. Its current status is more than just early bud swell. Those are about to burst! A little over a week early may not seem like much, but I would have thought last year’s was early, and yet this year it is even earlier. I suppose we might have to get used to “early” blooming as the new normal, as the climate continues its general warming trend.

All three of my pluots are also showing signs of waking up. I have ‘Flavor King‘, ‘Splash‘ and ‘Flavor Finale‘ varieties. The first two of those began to show some bud swell around 15 February last year, but the whole tree was not showing swell till another week after that. The ‘Flavor Finale’ did not begin to show its very first bud swell last year till 22 February. So these trees are really early! One good thing is that maybe they will all bloom together. My cross-pollination was not good last year, because the ‘Flavor Finale’ did not really get going till the other two were nearly done. 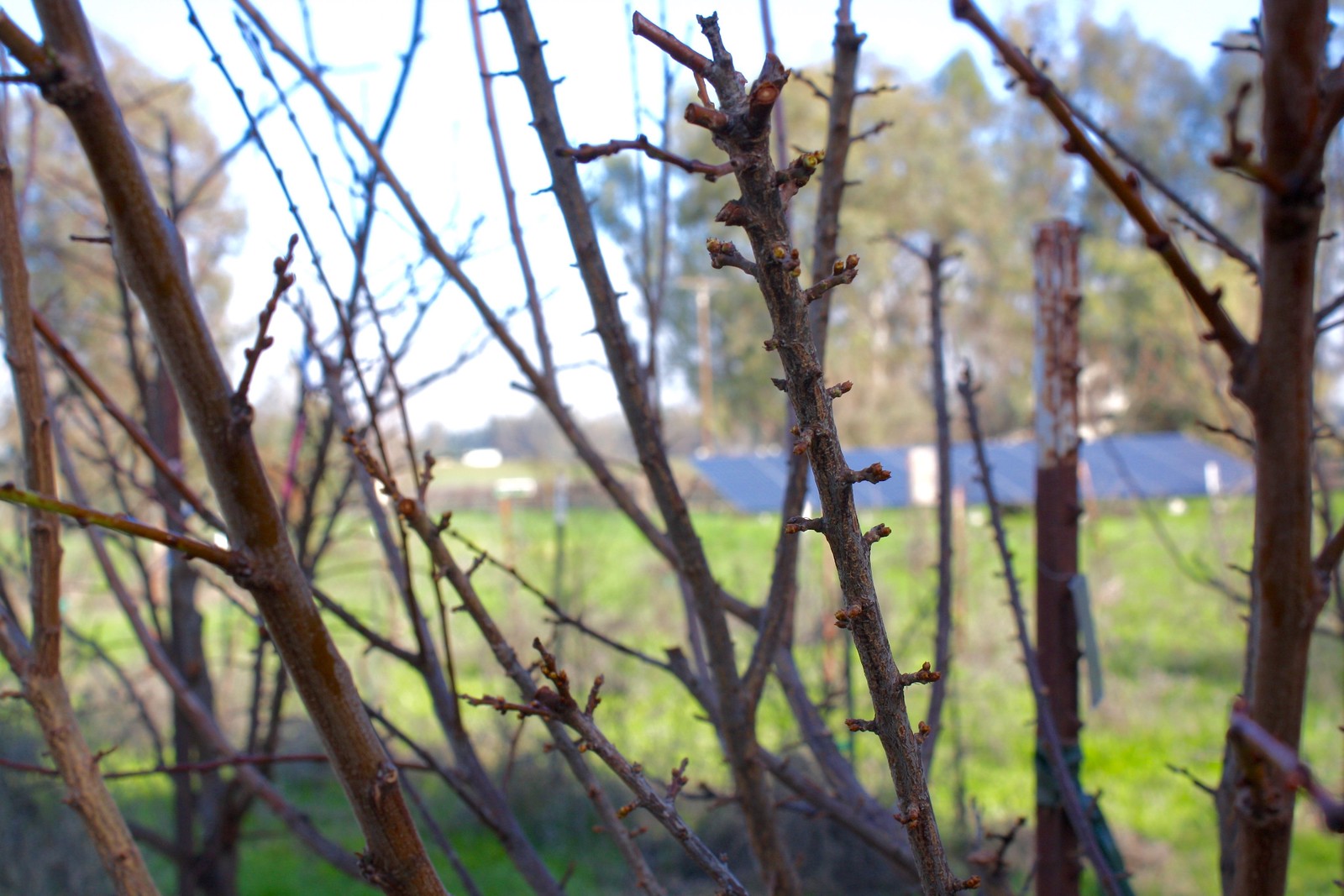 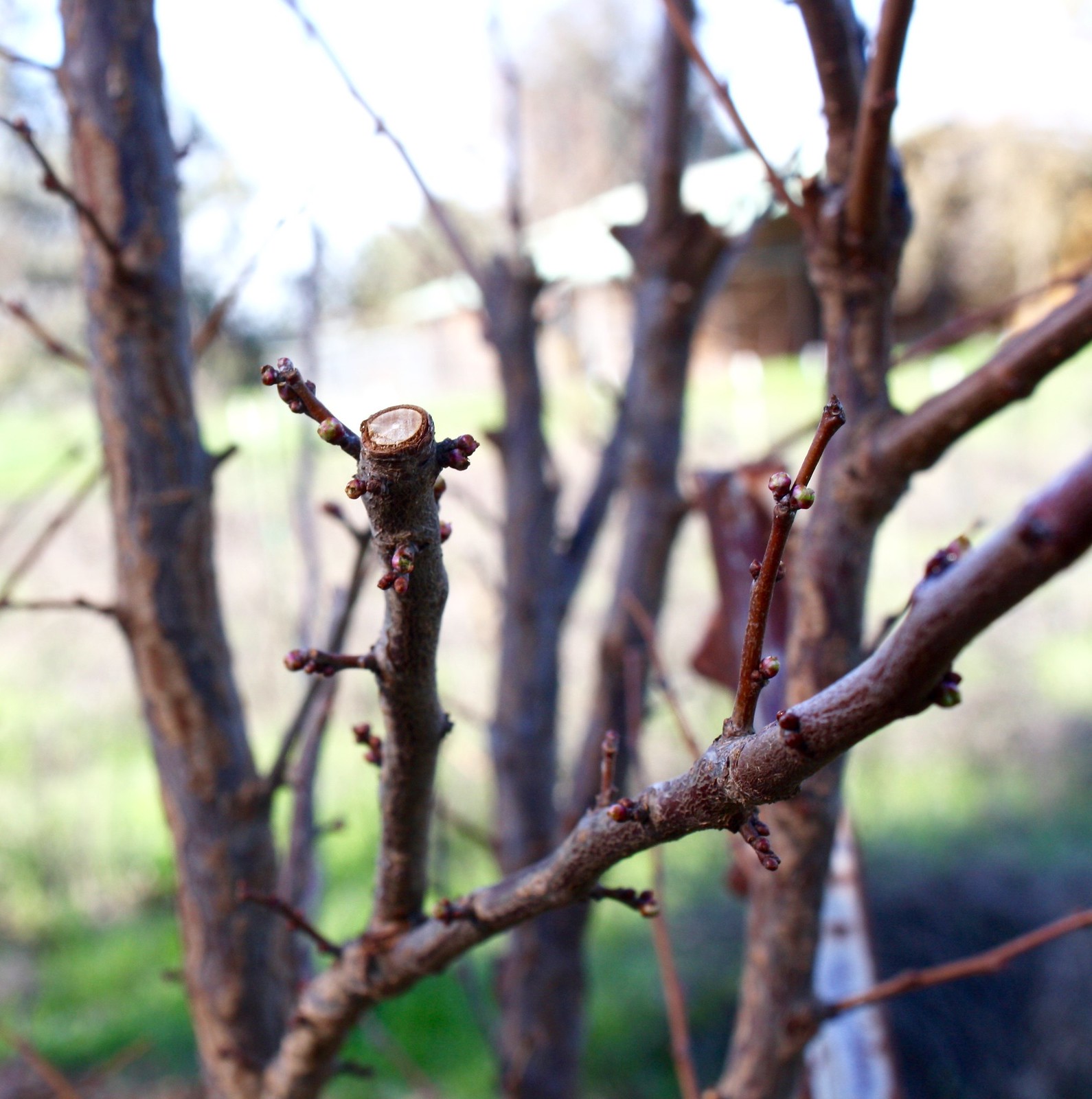 Two pluots shown above. The first one is the ‘Flavor Finale’ and I believe the other one is the ‘Splash’

The pluots also did not have really full blooms last year, partly due to the youth of the trees, but probably mostly because the chill hours (or “chill portions“) in the area were quite low last year (which is an ongoing trend). This winter, December was quite chilly, but January so far has been rather warm. (Data summary below.)

As for the almonds, they have their buds swelling, too. Still, it is striking that they will not be substantially earlier to bloom than some of the fruit trees. Things are just a bit whacky this “spring” so far.

_____________
Our temperatures; look how cold December was in 2013 and how warm it was for the average overnight in 2014! Also how warm January daytime highs were in 2014. This month it has been cloudy most of the time (and raining!), so the the lows have been warmer at the same time as the highs have been cool. In the two prior years, January was essentially cloudless and dry.

One thought on “‘Spring’ already?”