If a projection from elespañol (which I found by way of Europe Elects) proves to be essentially accurate, Spain’s general election this Sunday could produce a wee bit of a break with the country’s party-system tradition. 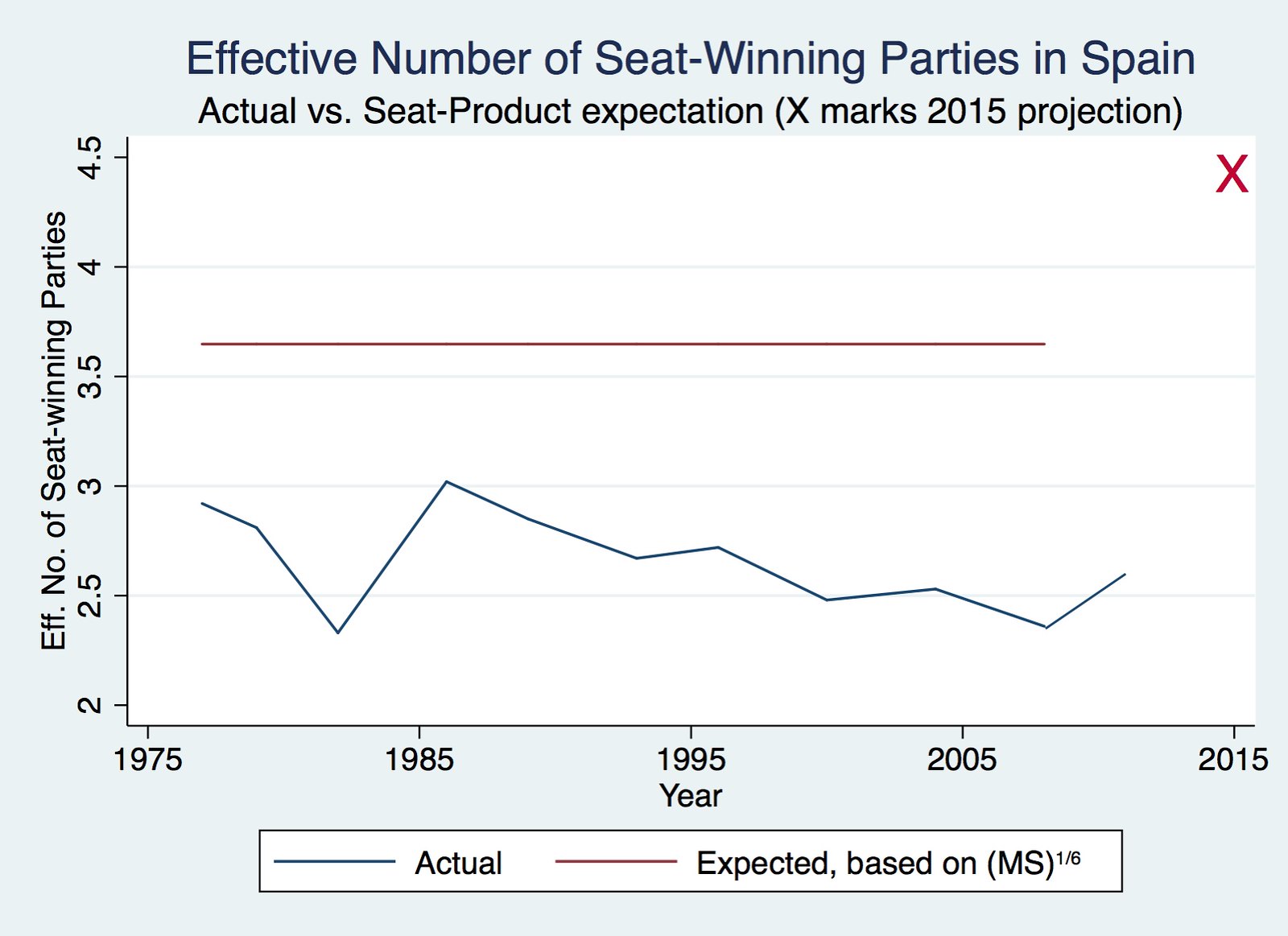 The blue line in the graph tracks the effective number of seat-winning parties in Spanish elections since the return to democracy in 1977. The red line is what we should expect it to be, given Spain’s “moderate” proportional system–where the many districts with small magnitude (number of members elected) has led some scholars to call it an essentially majoritarian, rather than proportional, system. In fact, it has not been uncommon for a single party to win a majority of seats, despite less than half the votes–a rather unusual occurrence under “proportional” rules.

Specifically, the “expected” value is based on Taagepera’s (2007) Seat Product model*, given Spain’s mean district magnitude (around 7) and assembly size (350). The rules have been constant, thus the expected line is straight. Needless to say, Spain has tended to be rather under-fragmented, relative to expectation. We should expect it to have an effective number of seat-winning parties of 3.65, yet the actual value has not even been above 3.0 but once, and has averaged a bit more than 2.5.

The bright red X is what it will be in this election if the projection were to be the actual result. In the trade, we call this an over-correction.

There was a small uptick in 2011, after a long period of steady decline brought on by the dominance of the two main parties, Socialist PSOE and the Popular Party (PP). But the 2011 increase is nothing compared to what could be in store in this election, with the emergence of two new parties, Podemos (on the left of the political spectrum) and Ciudadanos (on the right), which could jointly hold more than a third of the seats.

What this outcome might mean for government formation is an interesting thing to speculate on. I will not offer such speculation, but I am sure some readers have been following the pre-election conversation in Spain about the likely post-election options.

Here are the projected and current seat totals, by party:

And the effective number of parties by seats (NS) and votes (NV) for each election.

Note that the 2015 projection would be so out of line that it actually would raise the full-period mean from 2.66 to 2.81, despite being just one of 12 elections. I put “5?” in the NV cell for 2015, because Li and Shugart (2016; see footnote for link) show that, on average, NV=NS+.6. In Spain, the mean difference has actually tended to be a little higher, at .84. So maybe we will see an effective number of vote-earning parties around 5.3. That would be something–a value we might expect to see in Denmark or Israel (before its fragmentation really took off in the 1990s).

This looks to be one of those rare cases of a really serious shake-up election.

___________
* The Seat Product is district magnitude, M, times assembly size, S. The model states that the effective number of seat-winning parties, Ns=(MS)1/6. Despite its poor accuracy for Spain, it is overall extremely accurate. See Yuhui Li and Matthew S. Shugart, “The Seat Product Model of the effective number of parties: A case for applied political science“, Electoral Studies 41 (March 2016): 23–34.