In response to my post about the two-seat districts in Burkina Faso, David Altman (a leading scholar on Chilean and comparative politics) contacted me to say I was not quite right in my contention that the Chilean experience showed that two-seat districts systematically advantage the second party or bloc. Fair enough. I made my point utterly without nuance–as if the second list was always advantaged more than the first–and I elided the distinction between national and district-level effects.

David showed me a graph he had generated in which it is clear that, on average, there is little difference between the vote-seat gap for the main center-left alliance and that of the right-wing alliance; in fact, the gap tended to be slightly higher for the center-left. It is the right that has been consistently second in nationwide votes, so the data seemed to challenge my “systematic” claim.

In the Burkina Faso post, I went over a number of examples from the district level in that country where there was a large advantage in terms of the translation of votes into seats for the second party. I do not think David and I disagree about the district-level effects. But what about the national?

For reasons Taagepera and Laakso* first emphasized in 1980, the best way to visualize how electoral systems treat parties (or alliances) is not by using the difference between seat and vote shares for each party, but by the advantage ratio, A:

This is the approach I will use here. The first graph simply plots the distribution of A values in the Chilean elections from 1989 to 2013 (Chamber of Deputies only), using a kernel density plot. It also marks the arithmetic means with vertical dashed lines. 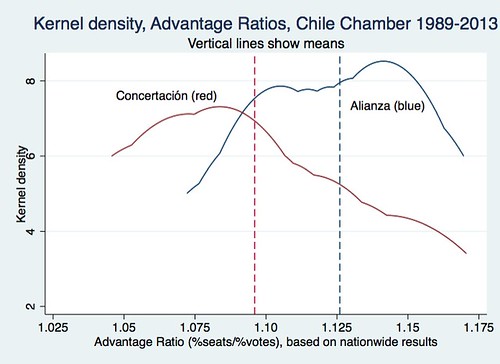 Of course, with only seven elections, we should be cautious in interpreting how “systematic” the effect is. Yet the trend is clear: the right-wing alliance (referred to in the graph as “Alianza” and shown in blue) has a notable tendency to have higher advantage ratios than has the center-left (“Concertación”).** Yet in every election the Alianza has been second in nationwide votes, albeit by widely varying margins.

The second graph shows the advantage ratio against the nationwide gap in votes between the two parties (Concertación vote share minus Alianza vote share), with each election labelled. 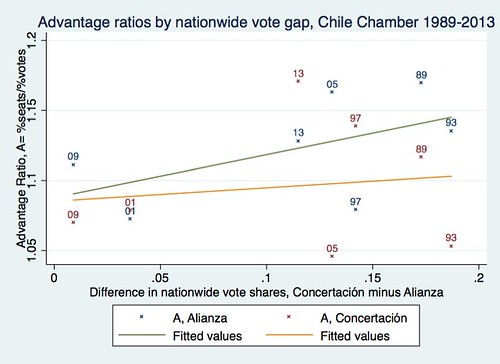 Note that as the gap grows, there is a tendency of the Alianza’s advantage ratio to increase. There is actually a small such tendency for the Concertación, too, although it is much closer to a flat line. More importantly, we would normally expect that as the top two parties/alliances grow farther apart in votes, the first one would gain more in seat share. Yet what the Chilean pattern shows us is that the second one gains more, relative to its vote share, as the gap grows. This is not something we would expect under any other district magnitude (except maybe M=4) under any proportional (or semi-proportional) allocation rule. It is this “relative to its vote share” point that I meant to convey. Two-seat districts are a good way to get the second force more over-representation than that of the first force.

If we turn to individual elections, we see that Alianza data point is higher than that for the Concertación in 1989, 1993, and 2005, all years in which the Alianza was more than ten percentage points behind the Concertación, plus in 2009 when the two alliances were almost even in votes. On the other hand, the large vote gap for the Concertación in two elections, 1997 and 2013, resulted in a higher advantage ratio for the Concertación. In 2013 I assume that has to do with the center-left having expanded its electoral reach by incorporating new parties and rebranding its list as Nueva Mayoría. I am not sure what the explanation is in 1997; the gap was large that year, but as the data plot shows, not unusually so.

I find it interesting that the worst year for the Concertación, by this standard, was 2005, which I had noted at the time as being unusual in having a bloc of parties compete against each other in the first round of the presidential elections while remaining united on legislative lists–the Alianza’s two main component parties had separate presidential candidates. The result in the legislative races was their best advantage ratio since the first democratic election of 1989.

It looks to me like two-seat districts in Chile have indeed generated a systematic greater advantage to the second alliance over the first, even if the effect is tempered by other features of specific elections.

** The right has run under different names in different elections. I am using “Alianza”; the center-left changed names from Concertación to Nueva Mayoría in 2013.

The data, by year (pardon the plain text formatting):

4 thoughts on “Visualizing the impact of two-seat districts”