The election may have been eight and a half years ago, but it continues to fascinate me…

If you have not read at least the latest of the two (and more) posts on this election, you may need to do so before this one will make sense.

I am looking for ways to visualize the relationships among Fatah, Hamas, and the independent candidates in the (mostly) multi-seat districts of the nominal tier of the Palestinian 2006 election. The question is to what extent Fatah may have cost itself seats–maybe even an achievable plurality–by “overnominating”. If a party overnominates, it has more candidates than its votes allow it to elect. In this case, because the voter could cast up to M votes (where M is the magnitude of the district), a party can nominate M candidates and be OK, provided it gets its supporters to cast all their M votes for their M candidates. However, if there are independents (or candidates of other parties) who appeal to the same block of voters, a party might see attrition of its voters and fail to elect as many as it might have with fewer candidates. The problem is that there may be a “camp” of Fatah plus Fatah-rejected independents, the latter having been denied the party endorsement but deciding to run anyway.

Here are some different ways of trying to assess the question of whether the Fatah camp overnominated from the available data. (In each case, you can click the image and get to a larger version.)

The first graph shows the total vote share of independents in each district on the vertical axis. On the horizontal axis is the party’s ratio of nominal to list votes in the district. That is, the sum of all the party’s endorsed candidates, divided by the party’s list votes. The red line is the local regression (lowess), and we have separate graph panels for Hamas and Fatah. 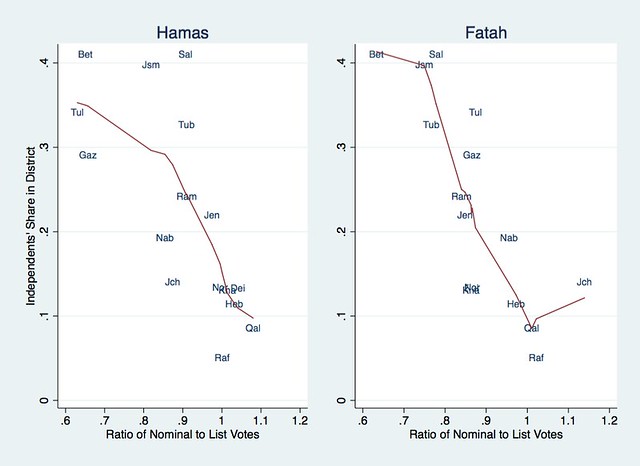 From this graph, it seems there was attrition from both parties to independents, albeit only sometimes in the same districts. (For example, in Tulkarem, where the vote share for all independents combined was around a third, Hamas had a much lower ratio than Fatah; the latter was at over .9.) It certainly is the case that both parties have a lower ratio where the district’s share of independents is greater, but there is no question that Fatah has a stronger relationship between the two variables. So, yes, it seems like Fatah may have seen more attrition from list to nominal for its candidates than did Hamas. However, I was surprised at how much a relationship there was for Hamas as well.

The second graph is a box-and-whiskers plot summarizing the distribution of a “candidate ratio” across both major parties in each district. Above each district abbreviation there are the numbers 2, for Hamas (Change and Reform) and 3 for Fatah. The candidate ratio needs a little explanation. First, I start with a magnitude-adjusted vote share for each candidate. This is their individual votes, divided by V/M, where V is the total number of nominal votes cast in the district and M is the magnitude. This way, we can normalize the shares across districts of varying magnitude. Then the ratio–what is actually being graphed–is this magnitude-adjusted candidate vote share divided by the party’s list votes. The purpose of this mathematical gymnastics is to get an idea of how much each individual candidate of a party deviated from the party list vote in the district. Thus where the box or whisker or an individual outlier point is above 1.0, it implies a candidate more popular than the party in the district, and where it is less than 1.0, the candidate ran behind his (rarely her) own party. 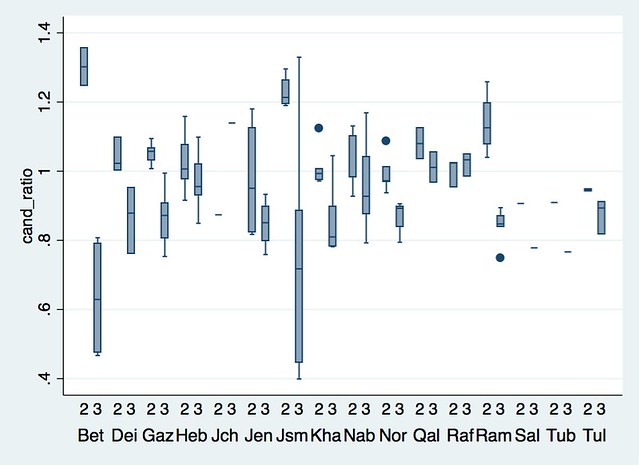 I had previously noted that the standard deviations of individual candidates’ votes were pretty small for both parties, but greater for Fatah. This is clear here, in that the “whiskers” are farther from the box for Fatah (party 3) than for Hamas in most districts. This is especially so in Jerusalem (Jsm). And all the Fatah candidates ran quite far behind their party in Bethlehem. In fact, I think the “two slates” thesis–that Fatah (or more precisely the “Fatah camp”) shot itself in the foot by nominating an extra set of candidates–really rests on these two districts. There is rather less evidence for it elsewhere. However, one can still see that, in general, Fatah candidates seem to run a little farther behind their party than do Hamas candidates, and most of the cases of the candidate ratio being over 1.0 for an entire party are Hamas.

(In cases where the data plot is just a horizontal line, we are looking at a single-seat district. Note how far ahead of his party the Fatah candidate was in Jericho. This is Saeb Erakat.)

The final graph is a little bit overwhelming, I know. But I wanted to plot all the candidates’ individual votes. Here again, I am using the magnitude-adjusted vote share. The constituencies are indicated by numeric codes (because that is the only way I could (think of to) do it in Stata), but I made sure they are in the same order as they appear in the second graph. 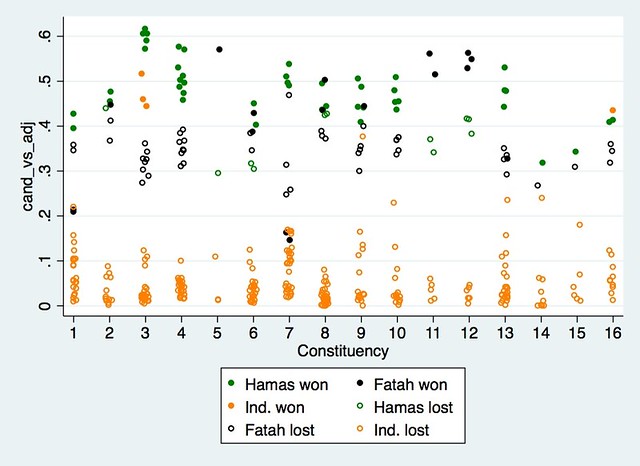 This version has “jittered” data points so that it is easier to see where two or more candidates were very close in votes. This is helpful, given the low intra-party deviation. The original, un-jittered, version is still on my Flickr site.

Green is for Hamas, black for Fatah, and orange for independents. Solid symbols indicate winners, open losers, though down near the bottom of the graph there are so many bunched together that they sometimes look solid. It should be noted that where there are Fatah winners around .20 or lower, these are Christian quota candidates.*

This graph allows one to visualize where there were independents in a district who were well ahead the pack of minor independents, and also where losing independents are found amidst losing Fatah candidates, or just behind the losing Fatah pack. I don’t actually see a lot of them, but I can imagine that the highest-polling losing independents in Nablus (code 9), North Gaza (10), Salfit (14), and Tubas (15), at least, may have robbed Fatah of a seat it (and its camp) could have won. It is worth noting that Salfit and Tubas are one-seat constituencies won by Hamas candidates who had under 35% of the vote. Other candidates for seat-robbing are Bethlehem and Jerusalem, where there are several independents with over 10%, and where we already saw big drop-offs in Fatah candidate votes, relative to the party list–and where I already conceded that the “two slates” thesis might have legs. But remember, from the first graph, Hamas also had substantial drop-offs in these two districts. It could be that some of these independents, albeit possibility from the Fatah camp, appealed to Hamas voters precisely because they were independent and not Fatah-branded.**

Rather than draw firm conclusions here, I just want to put the visualization of the data, by these three different but related means, out there for folks to comment on. Maybe someone will see patterns beyond those I pointed out.

* There are two of these in Bethlehem, with nearly identical vote shares, and two in Jerusalem; in addition, one of the independent winners in Gaza City is a Christian whose votes, it might be noted, are higher than any Fatah-affiliated candidate. He is the third ranked independent winner in that district.

** If so, that would have been even better reason to give the official endorsement to fewer candidates, thereby allowing some in the camp to appeal across party lines.

Key to districts, their codes (in the third graph), abbreviations, and magnitudes (in that order).