Of course, the answer depends on your definition of “place”. That is, compared to what? The table below compares the Gaza Strip first to several other enclaves, exclaves, or small territories, which would seem to be a relevant comparison group. Then it compares Gaza City itself to several other major urban areas, including a few in the Middle East. While the list of ex/enclaves may be close to exhaustive, obviously the second one is not. 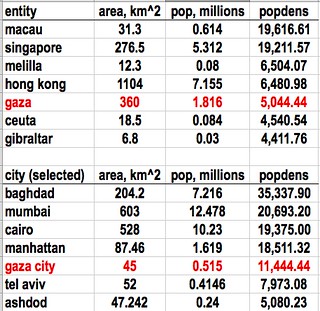 The claim is pretty hard to sustain when one checks the facts. In area, the Gaza Strip is similar to Singapore. But the latter is almost four times as densely populated. In terms of density, Gaza is close to Hong Kong (which is overall bigger) and Ceuta and Melilla (which are overall much smaller). But it doesn’t seem that Gaza is one of the most densely populated small territorial entities on earth.

So maybe commentators who make this remark mean compared to other urban areas. (I do not think they mean this, because the references always just say “Gaza” in a context that seems to mean the territorial exclave, not a specific city within it, but for the sake of argument…) Based on the second set of comparisons this, too, looks hard to sustain. Yes, 11 thousand people per square kilometers is dense, but Gaza City is no Baghdad or Cairo or Manhattan.

To be fair, there are specific places within Gaza that are incredibly dense. And some of these are indeed places where Hamas is active, and thus so are they places that the IDF hits hard. For instance, Jabalia has over 80,000 people in 1.4 sq. km. But again, the media comments I have read and heard do not say “Jabalia is one of the densest places on earth” (and I do not have any idea how it would actually compare with similarly geographically compact locations). They say “Gaza” is. Evidently not.

4 thoughts on “Is Gaza one of the densest places on earth?”