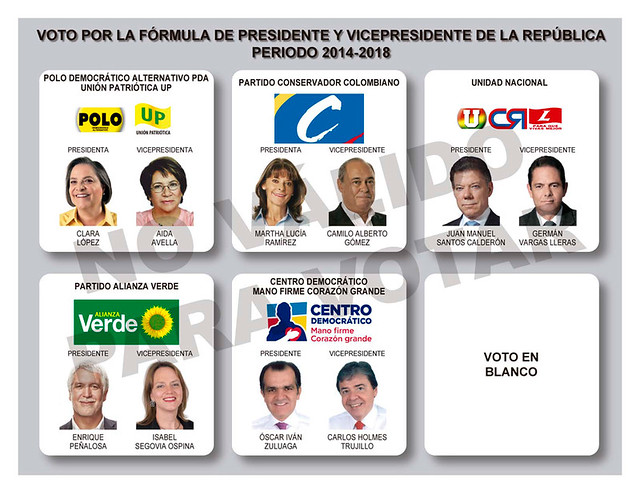 The photo was supplied by Steven Taylor, who wrote about the first round, and posted some other photos of his trip to Colombia, at Outside the Beltway.

One can see immediately that two of the tickets were presented by alliances. Juan Manuel Santos, the incumbent who was reelected (in two rounds of voting), and his running mate are indicated as the candidates of Unidad Nacional, and then the symbols of the three parties comprising this alliance are shown: Partido Social de Unidad Nacional, Cambio Radical, and Liberal. As an aside, I would note that we had some discussion in the earlier thread about whether the first of these parties, which was founded in support of former president Uribe but now supports Santos in opposition to the Uribe-backed challenger (Zuluaga), still used “Partido de la U” as its informal name. That name remains in use, as indicated at their website: partidodelau.com. At least as of today, it has a video animation that starts with “Vota contra la guerra, vota por la paz”, and then a marking of an ‘X’ across their ballot symbol and photos.

Note that the ticket headed by Clara Lopez simply has the names of the two parties backing her at the top, rather than an alliance name.

The ballot is also interesting for allowing parties to have a short slogan, which two of them incorporate into their symbols. The ballot symbol for Centro Democratico, backing Oscar Zuluaga, says “Mano firme, corazon grande” (“firm hand, big heart”), a clear indicator of its opposition to the Santos policy of continuing negotiations with the FARC guerrillas. Back to the Santos alliance, we see the Liberal Party symbol having the slogan, “Para que vivas mejor” (“in oder that you might live better”). I am not sure I have seen ballot symbols elsewhere with words other than the party (and sometimes leader) name, although I am sure other examples exist.