“The electoral gods could well be shining on Conservative Party leader Colin Craig.” So says the NZ Herald, in reporting on the new constituency boundary proposals in advance of the 2014 New Zealand general election. Auckland’s North Shore region could obtain a new seat, and it could be favorable Conservative territory.

If the National Party were to nominate a “low-profile” candidate in the electorate, and wink and nod in Craig’s direction, the Conservatives might make it into the next parliament, and be a potential post-electoral ally for the Nationals. 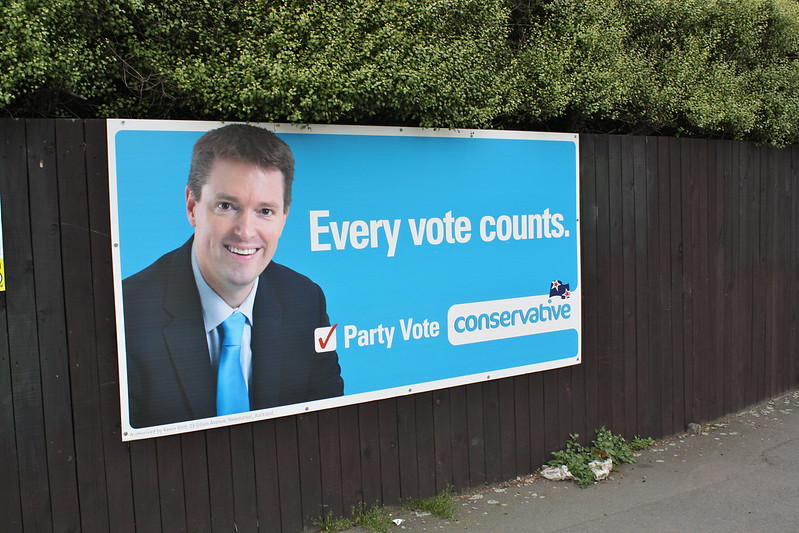 In the campaign for the November, 2011, election, Craig and his party had signs like this up in many locations (this one was in Christchurch; there was also a huge one in downtown Wellington).  The “every vote counts” slogan and the plea for party (list) votes both depended on the assumption that Craig would win his own district race. The party ended up with barely more than half the vote share it would have needed nationwide to get any seats if Craig did not win his contest: 2.65%, where the list-vote threshold is 5%. But once a party wins an electorate, it earns its full proportional share based on the list votes, even if that is below 5%; in this case, indeed, every (list) vote counts.

Craig put up a credible showing for a minor party that lacked a de-facto deal with a major party, winning 20.9% and second place in the Rodney electorate. That his vote was that high suggests there were indeed voters in this small-c conservative electorate splitting in his favor to try to get the Conservative Party represented. His vote was 3.27 times that of his party in the electorate, whereas National’s candidate’s vote was only 0.85 that of the National list. (The candidates of the right-wing Act, a National ally, and of New Zealand First also ran well behind their party in Rodney, although their votes were paltry, while the candidates of Labour and Greens ran about even with their own parties.)  Had National put up a weak candidate, Craig might have won the electorate; in that case, the Conservative Party list-vote share could have been sufficient for three seats (Craig, plus two from the list).

Given that two of its current allies have only one seat apiece (United Future and Act), and may not make it back in, National is in need of allies if it is to hope to retain power after the next election. No wonder the National government did not want to dispense with the single-electorate alternative threshold as proposed by the Electoral Commission in the MMP Review. (The Commission also proposed reducing the list threshold to 4%.) National needs allies like this, lacking allies assured of clearing 5% of the party vote like Labour’s potential allies, Green and (probably) New Zealand First. And Craig and his Conservatives look like a better bet to win multiple seats than United Future and Act–provided Craig has a winnable electorate in 2014. Moreover, as the NZ Herald article notes, Conservatives might even reach 4% if voters expected Craig to be elected, increasing the perception around the country that, indeed, every vote for the Conservative list counts.

16 thoughts on “Might NZ Nats cultivate a new ally?”