After each census, the number of seats in the US House that each state is entitled to must be recalculated. Rick Hasen’s Election Law Blog contains a pointer to an opinion piece in the Grand Rapids (Michigan) Press that suggests a change in the way this process is done.

U.S. Rep. Candice Miller, R-Macomb County, has proposed a fairer and more sensible system for deciding the number of Congress members from each state. […] Ms. Miller’s proposed amendment would change the word “persons” in the 14th Amendment to “citizens.”

The article goes on to say that this would grant Michigan one more seat than it currently has and California six (!) fewer.

Counting only citizens for the sake of determining how many people to have in Congress seems like common sense. Only citizens can vote and enjoy the full rights and privileges the country has to offer.

Well, yes, only citizens vote; however non-citizens pay taxes and receive government services–two reasons that would seem to make them relevant to calculating how much weight a state ought to have in the House of Representatives.

However, there is an alternative solution, and it does not force us to get into a divisive debate about citizenship and representation. It is so simple that it is rather amazing to me that it is rarely discussed:

INCREASE THE SIZE OF THE HOUSE.

It really makes little sense that a state should gain population (citizen or non-citizen) yet lose House seats, as Michigan and other states did after the 2000 census.

We are one of the few democracies in the world that does not periodically adjust the size of its lower (or sole) house. There is nothing set in stone about 435. It is just in federal law. In fact, we used to increase the size of the House periodically as population increased. We could do so again. Look at this graph: 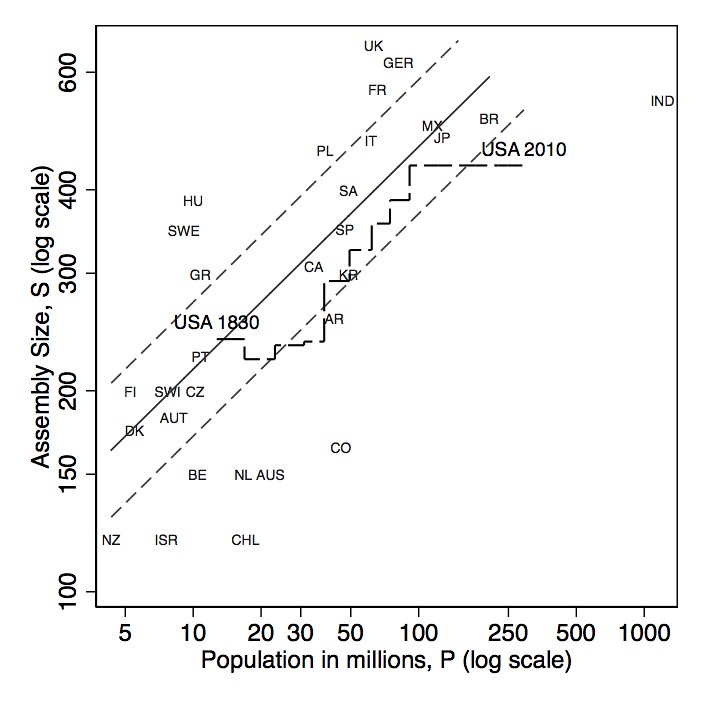 (This is for a forthcoming book on American democracy in comparative perspective; all rights reserved, of course.)

You can see two things here:

1. The US used to keep its House size just below the cube-root of its population (as Rein Taagepera’s model predicts), but has not done so since its population was under 100 million (in 1912!).

2. The US House is one the smallest in the world among established democracies with over around 60 million residents (citizen or otherwise).

So, why not make the House even a little bit bigger? We don’t have to go all the way up to 600 or so (which would still leave us below the cube root) all at once. We could just make long-term adjustments with each subsequent census (say 480 next time, then 500, and so on), thereby not depriving Michigan and other states of existing congressional districts.

Increase the size of the House via the “Wyoming Rule” (December 1, 2005; also has several interesting comments from readers)